Don’t look now, but Suzanne Collins’ novel about the early years of Donald Sutherland’s character Coriolanus Snow is heading for the big screen 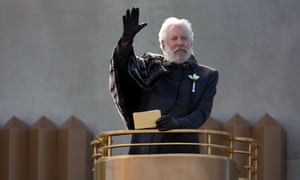 The Hunger Games movies represented a perfect storm for studio Lionsgate in the early part of the last decade. Jennifer Lawrence’s star status, combined with the remarkable popularity of young adult science fiction, meant those annual trips to the dystopian future nation of Panem stacked up more box-office gold than you might have found in the gilded Capitol’s brimming bank vaults. Lawrence carried the four movies in the bloodthirsty yet weirdly splatter-free saga virtually singlehanded: it’s impossible not to flash back to Katniss Everdeen’s anguished features when recalling the actor’s rise to Hollywood fame and fortune.

In the wake of the final (somewhat disappointing) brace of films, The Hunger Games: Mockingjay Parts 1 and 2, there were reports that prequels were being considered. At the time, Lawrence dismissed the idea, saying: “I think it’s too soon. They’ve got to let the body get cold, in my opinion.”

Does five years count as long enough? The Hollywood Reporter confirmed this week that Lionsgate will adapt Hunger Games author Suzanne Collins’s forthcoming novel, The Ballad of Songbirds and Snake, which takes place decades before the events of the original trilogy, for the big screen. Centre-stage this time will be a young Coriolanus Snow, the future president of Panem as portrayed so memorably by Donald Sutherland in the earlier films.

He won’t be volunteering as tribute, however, so forget the prospect of seeing those supercilious, snooty expressions pleasingly wiped from his face by an axe-wielding opponent or storm of mutant bees. In the book, 18-year-old Snow finds himself with a chance to revive the fortunes of his once proud aristocratic house when he is handed the role of mentor to one of the participants in the 10th annual Hunger Games. He is naturally devastated when it turns out he will be partnering a young woman from impoverished District 12, giving him little or no chance of victory. (You can hear Collins reading the first chapter here).

And so the stage is set for the new episode to offer an insight into the older Snow’s antipathy towards Everdeen, who also came from District 12. But will this be enough to lure in audiences? There are echoes here of the Star Wars movies, which also delivered prequel episodes centred on the back story of a major villain. But are we really quite so fascinated with Snow’s origins as fans of the original trilogy were when it was announced that George Lucas planned a new triptych telling the story of the fall of Darth Vader?

As Lucas discovered, the problem with focusing on a figure whom everybody knows is going to end up as the bad guy is that you have to try extra hard to deliver a character that sparkles. The young Snow will need to fascinate audiences to the extent that we forget all about his snakelike future misdeeds. Casting will be key.

Part of the issue with the Hunger Games movies was that they became less interesting the more we learned about Panem, its big players and the political machinations. The early, arena-focused movies worked well in a Battle Royale-lite fashion, but a new episode that delves further into Capitol high society doesn’t summon confidence in quite the same way. And, this being a movie based on a young adult novel, there is guaranteed to be romantic tension between Snow and his new mentee. Given the tedious nature of the previous trilogy’s love triangle between Katniss, Peeta and the almost completely anonymous Gale, that doesn’t bode well, either.

The more I think about this, the less I can imagine why anyone would be desperate to read Collins’s new novel, let alone go to see a movie based on it. Then again, perhaps Lionsgate could build some hype by stealing another Star Wars trick: surely we would all flock to see this flick if the studio used mo-cap ghosting tech to bring back Sutherland as a younger version of himself, sashaying back on to the scene with ginger mane and angular features restored to those of his prime. Perhaps Julie Christie could play the new Katniss …

… we have a small favour to ask. More people, like you, are reading and supporting the Guardian’s independent, investigative journalism than ever before. And unlike many news organisations, we made the choice to keep our reporting open for all, regardless of where they live or what they can afford to pay.

The Guardian will engage with the most critical issues of our time – from the escalating climate catastrophe to widespread inequality to the influence of big tech on our lives. At a time when factual information is a necessity, we believe that each of us, around the world, deserves access to accurate reporting with integrity at its heart.

Our editorial independence means we set our own agenda and voice our own opinions. Guardian journalism is free from commercial and political bias and not influenced by billionaire owners or shareholders. This means we can give a voice to those less heard, explore where others turn away, and rigorously challenge those in power.

We hope you will consider supporting us today. We need your support to keep delivering quality journalism that’s open and independent. Every reader contribution, however big or small, is so valuable