Dystopian stories are popular for sure, but you don’t have to turn to fiction to find them.

t’s no secret that young-adult dystopian fiction had a very real moment recently with franchises like Divergent and Maze Runner making it to the big screen. But the most wildly successful has to be the Hunger Games series by Suzanne Collins. The movie versions featured Hollywood darling Jennifer Lawrence among other big-name actors like Donald Sutherland, Philip Seymore Hoffman, Liam Hemsworth, and Elizabeth Banks.

Dystopian stories are popular for sure, but you don’t have to turn to fiction to find them. We can see them in the socialist countries that existed and continue to exist in the real world.

1. The Capitol vs. the Districts

In The Hunger Games, the Capitol is the seat of political power in the nation of Panem. It’s also where you find all the good stuff. The protagonist Katniss, from impoverished District 12, is shocked by the beauty, the cleanliness, the opulence that she sees in the Capitol. The colors and varieties of clothes and jewelry, the quality and quantity of food, the grace of the architecture, the comfort of the furnishings. Cutting-edge holographic technology. Weapons. Even simply reliable electricity. Everything surpasses what’s in the Districts.

It isn’t that such finery isn’t affordable to the people back home, it’s that it isn’t available at all, not even to the District mayor. The everyday folks back in the District are stuck with ramshackle houses, much-mended clothes, and low-quality food that is only sometimes enough.

In the Soviet Union, it was a similar situation in the capital cities like Moscow, if less exaggerated. Since it was the seat of political power for the Communist Party, that’s where the majority of luxuries were. Luxury goods were very expensive and hard to find outside of the city, if they could be found at all. Big cities like Moscow were where you had the best shops, the best vehicles, the best clothes. Some of the goods managed to get out to the countryside, especially if there was a particularly important industry there, but the largest concentrations were in the capital city.

Even today, the dichotomy of the capital having the good stuff (or at least the better stuff) while the countryside does without remains true. Check out this satellite image of North and South Korea. 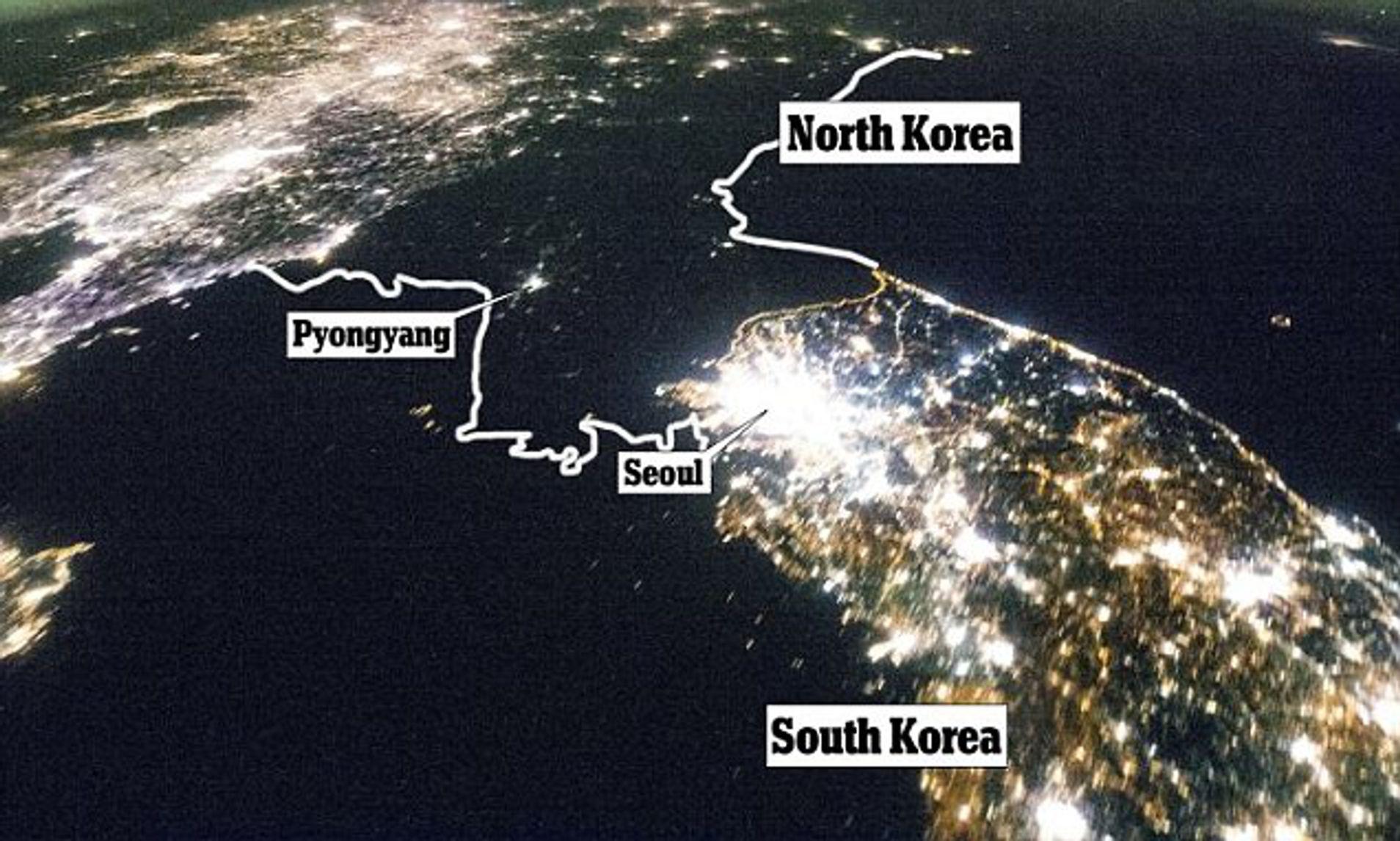 Relatively free South Korea is lit up throughout the entire country, not just the capital city of Seoul. In North Korea, Pyongyang (the capital city) is a conspicuous pinprick of light in a sea of darkness. Sure, in major cities in fairly free countries, you find a greater concentration of high-end goods and architecture, but New York City, for example, isn’t the nation’s capital, nor is it even the state capital.

2. Fine Dining vs. Scrambling for Scraps

While in the Capitol, Katniss is stunned by the food available, the kind she’d never even dreamed of back home in District 12. In fact, during her pre-Games interview, when asked what she finds to be the most impressive thing about the Capitol, she answers, “The lamb stew.” Earlier, in chapter five, she tries to compare a single meal on the train to the Capitol with what she’d be able to come up with herself at home:

I try to imagine assembling this meal myself back home. Chickens are too expensive, but I could make do with a wild turkey. I’d need to shoot a second turkey to trade for an orange. Goat’s milk would have to substitute for cream. We can grow peas in the garden. I’d have to get wild onions from the woods. I don’t recognize the grain, our own tessera rations cook down to an unattractive brown mush. Fancy rolls would mean another trade with the baker, perhaps for two or three squirrels. As for the pudding, I can’t even guess what’s in it. Days of hunting and gathering for this one meal and even then it would be a poor substitution for the Capitol version.

Back in the real world, Soviet apparatchiks enjoyed exclusive grocery stores that non-Party members were barred from using. Steaks, lobster, and caviar were secretly delivered to Party elites that never made it to the shelves of even the exclusive Party grocery stores while the common people were relegated to meager supplies of low-quality foods. But even the finest food in the Soviet Union couldn’t compare to what was found in grocery stores in the US.

A more modern example is Venezuela. The average Venezuelan adult dropped 25 pounds in 2017 due to lack of food, and many are suffering from malnutrition. Meanwhile, Socialist Party loyalists receive “solidarity bags” of food and President Maduro can be seen feasting at a decadent table with his wife.

In Panem, the Capitol enjoys luxurious, high-tech hover transports and slick motor cars. What motorized transportation that exists in the districts is for moving around production goods and inputs (and Peacekeeper troops). Katniss takes note of the District 12 coal miners walking to and from their shifts, exhausted. In fact, until becoming a tribute, Katniss has never ridden in a car.

It’s a short ride from the Justice Building to the train station. I’ve never been in a car before. Rarely even ridden in wagons. In the Seam, we travel on foot.

In the Soviet Union and East Germany, common people, if they managed to even get a personal car, paid a small fortune for low-quality junkers and another small fortune for garage space so the precious autos wouldn’t be stolen and/or stripped for parts. They were so precious, in fact, that they were rarely used lest they become damaged or break down. But at least the military had their tanks and the Party top brass got armored limos.

In modern Cuba, the requirement that citizens have a permit to buy a car was only repealed in 2014. A recent episode of popular British car show Top Gear showed the hosts taking a trip to the island nation to get a feel for their car culture. Most cars were modified classic American cars that were imported before the embargo of 1959.

Granted, the embargo was instituted by the US, not Cuba, but there ought to be European, Japanese, and Korean cars, right? Taxes and markups make buying a new car 4 or 5 times more expensive in Cuba than in Europe, so even extremely modest econoboxes are out of reach of the common Cuban, hence the prevalence of what Americans would consider very old cars. Many everyday Cubans with a car have it registered as a taxi so they can give rides to those without one. But El Presidente still has access to those pimpy armored convertibles and his cronies ride around in new Range Rovers.

In Panem, every District has an assigned specialty. Our heroes’ home district, 12, mines coal. District 11 deals with agriculture. The closer the district is to the Capitol, the “nicer” their specialty. District 1, for example, makes luxury goods like jewelry and other decorations for the Capitol. District 3 creates its technology. Unless you’re a tribute or a coach for the Hunger Games (or you join the Peacekeepers), you’re forbidden to leave your district to do something you might like better.

In China under the rule of Mao Zedong, the citizens were given a lifetime employment guarantee that came to be known as the “Iron Rice Bowl.” Knowing you’ll always have a job might sound nice, but in practice—since there was no private enterprise, only state-owned and state-run enterprise—your permanent employer was the government. People were divided into work units, which they tended to be born into, that controlled almost every aspect of a person’s life. The work unit administration had to grant permission before someone could move to a new city, and, of course, that permission was contingent on how “good” a citizen you were. The Chinese social credit system you hear so much about is not a new idea.

Nowadays, North Koreans are still kept on a very short leash with only a very select few (politicians and athletes, most notably) being allowed to leave the country, regardless of their wishes. In Venezuela, as their economy continues to collapse, women who had been health care professionals, lawyers, and professors resort to selling their own bodies just to feed themselves and their families. What these people want, what they’ve studied and trained to do, is irrelevant when their main concern staying just ahead of starvation.

5. Freedom of Expression vs. Crushing Dissent

The very basis of the Hunger Games is centered around punishing the already subjugated Districts for their failed rebellion attempt decades ago. The yearly reminder of who exactly is in charge is the foundation of the story itself. These Games are a pre-emptive form of dissent suppression. In the 74th Games, Katniss’s three-finger salute for Rue after covering her in flowers and her partnership with Peeta are viewed by the Capitol as dissent, and they go out of their way to attempt to kill her in the Games. In the very first chapter, Katniss remembers,

I scared my mother to death, the things I would blurt out about District 12, about the people who rule our country, Panem… Eventually I understood this would only lead us to more trouble. So I learned to hold my tongue and to turn my features into an indifferent mask so that no one could ever read my thoughts.

And let’s not forget the poor Avoxes, people deemed traitors who’ve been rendered mute and forced into servitude in the Capitol.

The Soviet Union and East Germany may not have had Hunger Games, but they definitely had gulags and the Stasi. Any action or speech that didn’t fall within acceptable norms set by the Party was viewed as deviance and dissent and could net you a one-way ticket to “re-education.” There’s evidence that the Ukrainian Holodomor, a man-made famine from 1932-1933 that saw millions of Ukrainians starved to death, was instituted to punish perceived disloyalty.

To this day, critics of the Chavez/Maduro regimes of Venezuela are imprisoned or simply killed. A Venezuelan friend and former co-worker can’t return home for fear of retribution for his political stances, and he’s far from the only one. And North Korea’s system of prison camps for those who dare to question Dear Leader’s authority is the stuff of nightmares. Masaji Ishikawa, who escaped from North Korea, writes,

What if the local villagers came to realize that their standard of living was pitiful? Worse still, what would happen if they got wind of the concept of free thought from us? They might question the wisdom of Kim Il-sung. And that was verboten.

To be clear, there’s no shame in enjoying dystopian fiction. Goodness knows I certainly do. Watching either on the screen or in our mind’s eye as our courageous hero or heroine topples the clearly evil regime is intensely satisfying.

But these fictional stories gain a certain weight when we pause to think about the real-life dystopias that existed and continue to exist today. Granted, no government, no society, is ever perfect. Even the freest, most prosperous nations have room for improvement. All governments fall short of living up to their stated principles.

That said, some are worse—much worse—than others. While the ones that trample the human rights of their citizens aren’t limited to the command-and-control regimes of socialism, all of those socialist states that fully embrace the ideology ultimately do. As we celebrate the 30th anniversary of the fall of the Berlin Wall on November 9, remember the real-life heroes and heroines who risked everything for freedom. But also remember those who are still suffering under the bootheels of those governments that seek to control them.